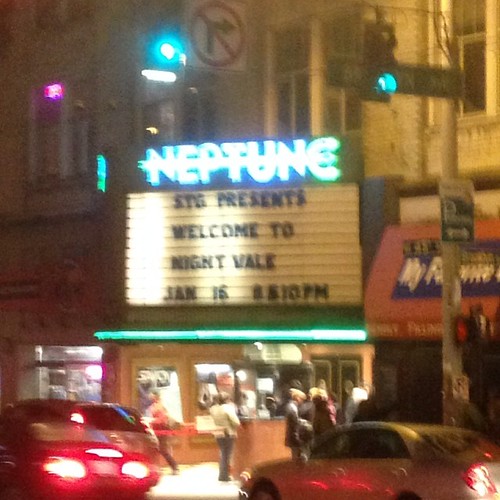 I am going to see the Welcome to Night Vale live show tonight in Boston. I am ridiculously excited by this.

In preparation, I re-listened to my very favorite episode, “A Story About You.” (Transcript here,* although you are denied the beauty of having Cecil read it to you). Still think this should have been nominated for Best Dramatic Presentation (Short Form) for the Hugos that year.

*all quotes below, unless otherwise noted, are from these transcripts.

I read the comments on the Youtube video, which, surprisingly, were not virulent and ugly, but they didn’t provide the probing discussion of this episode that I had hoped. One comment in particular caught my eye:

I just re-listened to this episode on my iPod and came here hoping there would be ppl discussing its meaning or purpose b/c this one was total gibberish to me, which probably means I am missing something. The only thing I got (Thank You The Fear Channel), was the Apache Tracker’s warning. If anyone has an idea of what this one was alluding to, please tell me.
–Melissa Koczur-Mitchell

At first I was like, Are you kidding me? This episode is rich with theme! But then I realized Melissa is probably referring to meaning or purpose within the context of the show. And, it’s true, there’s relatively little here that moves the story forward, except for the Apache Tracker’s warnings in Russian, which seem to refer to future trouble at the bowling alley.

But thematically… this episode touches on the absurd human condition, like everything I love. I think that meaning lies in quotes like these:

You have been haunted ever since by how easy it was to walk away from your life, and how few the repercussions were. You never heard from your fiancee or your job again. They never looked for you, which doesnâ€™t seem likely, or maybe itâ€™s that in Night Vale, you cannot be found.

The lack of consequence.

And at the end:

All at once, the consequences. All at once you are no longer free. Itâ€™s all coming back around.

This episode is, just as it says, a story about you — but also a story about me, a story about everyone. A story about life, distorted large (like the titan planet) and small (like the miniature house), but inescapable; it is being broadcast, even if just on the radio station inside your own head.

Inescapable, until it’s not, of course; until that radio station inside your head goes off the air.

This episode has “meaning and purpose” in that it is what Night Vale is all about: the stories we tell ourselves in the darkness behind closed eyelids.

Also, yanno. This episode contains one of my favorite, Dream Cycliest quotes in all of WTNV:

You saw above you a planet, of awesome size, lit by no sun. An invisible titan, all thick black forests and jagged mountains and deep turbulent oceans.

… it doesn’t look nearly so fearsome written out. Maybe it requires Cecil’s dulcet voice and a background of spooky Disparation music.

I hate to sound like a Night Vale hipster, especially since I’m a come-lately fan of the series, but I feel like many of the criticisms of the show miss the point. I’ve lost count of the number of people who have told me that they started listening to it but gave up when no coherent plot emerged; without that, they felt like it was the same gimmick over and over again.

It’s true that there’s no conflict-driven, multi-episode plot until fairly late in the series (I’d argue, the threat of StrexCorp, which I don’t think emerges until… at least 20 episodes in? And doesn’t conclude until “Old Oak Doors,” episode 49). But I’m okay with that — I enjoy the ride. I enjoy the recurring characters. I enjoy the absurdism and Lovecraftian flourishes. These things don’t feel like gimmicks to me. I always feel like I am discovering new and interesting parts of the town, while connecting with the same, delightfully askew cultural touchstones. (Even “A Story About You” has an appearance from Telly the Traitor!)

And in the midst of this weird humor, I’m constantly teasing out truths about life and art.

I feel like the folks who are in it for the long haul appreciate that.

… or they’re Cecil/Carlos fangirls. Whatever floats your boat 😉

I don’t think this series is going to come to some satisfying end where everything is tied up. I think a Twin Peaks ending would be entirely appropriate; an ending whose meaning I can tease out and recreate in my head over years and years. I don’t expect any grand unifying theory of plot; I realize this, even as I compare the dates in “[Best Of?]” to dates in “Cassette,” searching for patterns that don’t exist.

The only appropriate response is to sit back, relax, and drink to forget.

2 thoughts on “Welcome to Lise Being a Night Vale Hipster”