Last week I was in Ireland and England, doing some tourism and attending Imaginary Consequences, the British LARPing/freeform convention in the tradition of Intercon.

In the past, we’ve flown through Dublin on our way to England, as Aer Lingus, an Irish carrier, usually has some of the cheapest flights. This time, rather than spending hours in the Dublin airport in the middle of the night, we decided to stop for a couple of days and do some tourism and adjust to the time change.

We flew out from Boston last Monday evening, taking the usual transatlantic red-eye, and arrived, sleep-deprived, in Dublin on Tuesday morning. We shuffled off to a taxi rank and got one to take us to the Croke Park Hotel, right across from the stadium with the same name.

The hotel had been recommended to me by some FB friends who had stayed there, and it did not disappoint. I had contacted them ahead of time saying, “hey, we’re coming in on a red-eye, do you have early check-in?” They told me there wasn’t a formal process, but they’d try to have a room ready. Thus, when I arrived at their door at 9am, there was in fact a room ready! Delightful!

Did you know that some hotels in the British Isles have power only when a keycard is inserted into a slot by the door? Neither did we! Cue a few frantic minutes of trying to figure out why our room didn’t have power.

Tuesday was mostly a wash. We slept for a few hours, woke, and went out in search of food (in the middle of the afternoon, no less). It was rainy and windy, and there wasn’t much near us. I was hoping to find something like an Irish pub — because, goddamit, we were in Ireland! — but there was very little near our hotel except a closed Italian restaurant and a lot of sketchy bars. Bars are not pubs, as I learned, after I awkwardly walked into one, sat down, and then left, realizing this wasn’t going to get me food, since it clearly didn’t have a kitchen.

We returned to the hotel defeated, and visited the hotel bar instead, where I fortified myself with a cider and an egg mayo (egg salad) sandwich. I’m not sure why I thought cider was a good idea, but I was in a land where cider was taken seriously, and I was going to have some. (Orchard Thieves — good stuff. It has foxes on the label! I liked it a lot better than the Bulmer’s I tried later in the weekend. But I freely admit I have no taste, and prefer a sweeter cider).

There was more trying desperately not to fall asleep in our hotel room while watching RiffTrax on Matt’s phone, and then dinner at the hotel. I knew if I walked far enough I could probably be in the center of Dublin (I would later prove this true), but I had no energy for that. And I needed to stay up until midnight, I knew, for Intercon signups. (We managed).

Wednesday we did a little tourism. Our hotel stay came with tickets for the Dublin Bus Tour, a hop-on hop-off circuit of the main attractions of the city. We did the whole tour (and parts of it twice), getting off at Kilmainham Gaol and Trinity College.

Kilmainham brought up a lot of Shadows of Amun memories — it’s where the leaders of the 1916 Easter Rising were imprisoned and executed, and there are plots around that in Shadows. Matt referred to the experience as “Bradford Reilly tours Kilmainham.”

Overall experience was sobering, but strangely beautiful — especially the panopticon, with its late 19th century stylings. (Used, apparently, for a lot of movies).

Here’s a photo, though it’s not my own: 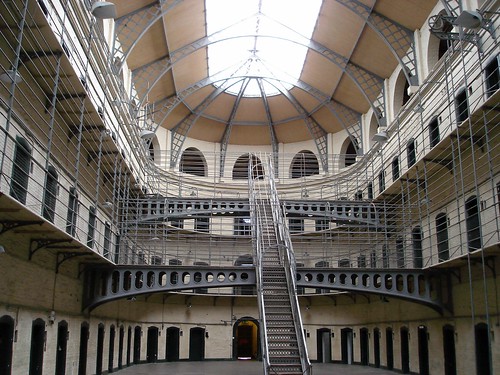 Another photo that I wish I had taken: 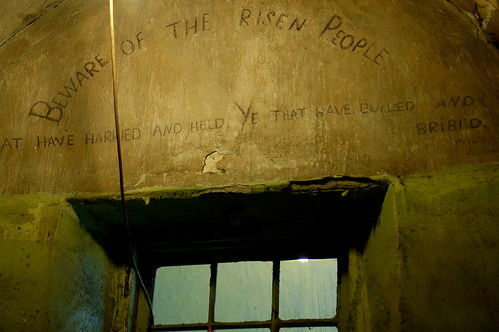 The second place I went was Trinity College’s Old Library, to see the Book of Kells and the Long Room.

I found the Book of Kells experience … kind of underwhelming? There’s a lot of lead-in — you go through a whole exhibit about the life of a monk, other contemporary prayer books, pigments, symbolism, and practices in illumination, etc — before going into the Treasury and viewing four pages of illumination.

(I expected the pages would be laid out side-to-side, but nope, it’s bound, so you only see what pages the book is turned to at the moment).

That’s fine; I learned a lot, which is all I ask. Also, the title of the exhibit — “turning darkness into light” — is from the Robin Flowers translation of Pangur Bán, so hey, cats!

Here, have a public domain image of the famous Chi Ro page, which we only got to see pictures of (the book wasn’t turned to that page):

Upstairs from the Treasury is the Long Room of the Old Library, which is a beautifully-architected mausoleum of books. I wish I could have seen more of the old, calfskin-bound volumes from (at latest) the 19th century, instead of the exhibit about YA lit inspired by mythology. There’s something beautiful and haunting about a room full of people’s lives’ works, lying forgotten and dusty.

Possibly I am just weird.

Other than that we followed the bus tour around, hearing about attractions only glancingly seen. Twice we heard about the Duke of Wellington’s birthplace, and his attitude about that (“just because you’re born in a stable doesn’t make you a horse”); blessedly, we only had to hear once about James Joyce consummating his relationship with Nora Barnacle (or about a character in Ulysses buying something at Sweny’s). (I have no love for Joyce. Sorry-not-sorry).

We got off the bus for the day on O’Connell Street and wandered aimlessly for a bit, in the wrong direction for food. Finally we found ourselves in a restaurant called Flanagan’s, where I had fish & chips and Matt had beef & Guiness pie. Then we made the long-ish walk back to our hotel.

We had an absurdly early flight to Gatwick on Thursday, so that was pretty much the end of our Irish adventure! There was still much I would have liked to visit — Dublinia, the national museums, the Teeling Whiskey Distillery, etc. — and that’s not even leaving Dublin.

Next time I’ll talk about my time at Consequences itself!