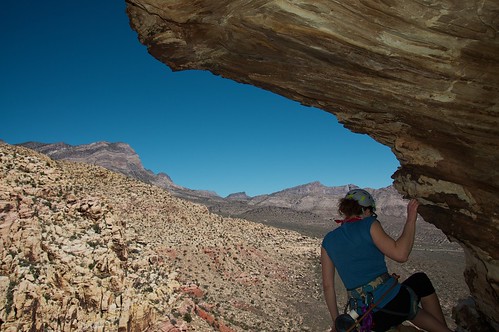 My friend Jess — she of the occasional book club — long ago invited me to go climbing with her, and I finally did.

… that sentence is much simpler than the actual event warrants. This was in fact the third date we’d set, reaching back almost a year. One of those times was canceled because she injured herself falling off her bike, but at least one other time I canceled because I was too anxious to follow through.

I wasn’t scared of injury. Indoor climbing is pretty safe, as some cursory research told me. There are injuries related to strain or overuse, like any sport, and various scrapes and bumps, but almost no one is hurt from falling. There’s always a soft pad (in bouldering), or a harness (in other types), to catch you.

But I have regrettably reached the point where new experiences — even something as simple as learning a new board game — are anxiety-provoking. I wasn’t afraid of falling, but I was afraid at looking or feeling like an idiot.

… no, not even that, precisely. It’s more like a foundless sort of anticipatory anxiety. It’s believing that whatever the change is, it’s going to be more uncomfortable than the status quo. It’s similar to what I feel before I go to any larp event, or when I decide to listen to more mindless radio rather than an audiobook.

It’s a kind of comfortable inertia.

I mean, let’s face it. Most days, I get up, I go to work, I come home and do something time-wasting. Coming out of work, taking a right turn to go east on the Mass Pike — towards Boston, towards civilization — feels so wrong that I have countless times accidentally gone west, towards home, instead.

You might have bet I’d chicken out again on the Wednesday in question. The odds certainly looked against me that morning. Matt was still recovering from a larp weekend, so he wasn’t awake to make breakfast and put the trash together, like he usually does. On top of that, there were 3-4 inches of snow on the ground when I woke up. I had to bag up the trash myself, get out the door, clean off the car, and deposit the trash at the end of the long driveway — all without caffeine or food in me. I got as far as the center of town before I realized I’d forgotten to leave the trash, and had to double back. Work wasn’t especially troublesome that day, but I was crabby, and so every little frustration seemed doubled.

But, I was determined: no matter how shitty I felt, I was going to climb.

At the appointed time, I left work, turned right to go towards Boston, and found myself in Cambridge with Jess. A short walk — and an explanation of the different types of climbing — later, I walked into Brooklyn Boulders Somerville (BKBS).

The first thing I noticed: there was a line out the door.

I dunno about you, but I’ve never been to a gym or athletic club where there was a line to get in.

Jess assured me it was busy every night, though it was a little bit busier tonight, as they were running their Out to Climb event, a night aimed at bringing in LGBT climbers. (And how awesome is that??)

Anyway, I signed a waiver, rented shoes and a harness, and Jess got me in as a guest on her membership. I got a very brief tour of the facilities (co-working spaces! yoga classes! a full weight room!), and didn’t have the heart to tell the very kind gentleman that I didn’t live anywhere near Somerville and was unlikely to ever buy a membership, even if I did fall in love with climbing. I then got a quick “how to fall” lesson, and then Jess and I were ready to climb.

A thing to know about Jess: she loves to climb, but she loves to teach even more. Teaching me to climb really made her super happy, and that made me happy, too. In particular, she said, she loves to teach women to climb, as it’s a very male-dominated sport. Also, even well-intentioned male teachers don’t necessarily know how to relate to someone with a different body than theirs. And things like center of gravity, height, and the size of hands and feet make a big, big difference in climbing.

(Climbing in general may be a male-dominated sport, but you wouldn’t know it to look around BKBS!)

The type of climbing I tried is called top rope climbing, which means that your harness attaches to a rope which is double-looped over an anchor at the top of the wall. The rope then comes back down into a belay device held by a partner on the ground. As you climb, some combination of your partner and the belay device take in the slack. The friction from the double wrapping at the top, plus the belaying, mean that if you lose your grip on the wall — which you will — you never descend more than a few inches. Pendulum physics woohoo!

The disadvantage of top rope is that it means your partner can’t climb at the same time as you. From what I saw, top rope climbers usually work in pairs, taking turns belaying each other, but since I’m not belay-certified, Jess had to belay me for the whole session. She told me not to feel bad about that. She’d climbed already that week, and in this case, her pleasure with teaching eclipsed having to stay on the ground.

So we picked out the only easy route that was available, a 5.5, which is the lowest they have at BKBS. Jess tied the rope into the harness, showing me how to safety-check it, and going over some of the common signals I’d need to communicate with my belayer. I got about halfway up the wall — maybe about 10-15 feet up? — before my shaking arms and legs told me I had to stop. From what Jess told me, that’s not half bad! (But maybe she says that to all the people she teaches).

While I took a break, we walked around the gym watching other people climb. We watched an especially brave woman lead climbing the Tongue — a ~60-foot wall which angles outward at the top, so that you are climbing nearly horizontally for the last ~15 feet. (I think this is a picture of it? All I have to say is, wow. I get sweaty palms just thinking about that).

Jess also showed me different types of handholds, and made suggestions about how to position my weight on slanted handholds. We talked too about “reading the route,” i.e. placing your hands and feet in the way the designers of the route intended, making it easier on yourself.

When there was another 5.5 route free, we tried it… and was less successful. I didn’t get more than a few feet off the ground, and scraped some skin off my hand in the process. Interesting that the same rating of route was so much more difficult. It was just really hard to perform the movements necessary to get where I needed to go — I had to raise my legs too far above my center of gravity, and reach beyond my height.

I had another shot at route #1, and didn’t get as far as my first try, but by that time I was pooped. (And desperately in need of dinner).

I was also exhilarated — this new climbing culture was so fascinating to me. Here I was surrounded by the fanatically fit, who seemed to be having a great time. We ran into a pair of women who were top-roping while wearing party hats, and that pretty much embodied the whole spirit of the place.

On the way out the door, we noticed a sandwich board with this quote chalked on it:

“A person needs new experiences. They jar something deep inside, allowing him to grow. Without change something sleeps inside us, and seldom awakens. The sleeper must awaken.”

Obligatory nerd pedantry: It was attributed to Frank Herbert in the book Dune, but I think it’s actually from the movie version. Some version of it was in the book, I seem to recall, but not precisely in that formulation.

Seeing that quote was like a jolt of lightning. It perfectly expressed the sentiment I had felt prior to coming — that comfortable inertia — and how the experience had awakened and refreshed me.

I connected it immediately with another quote — the “soft animal of your body” that Mary Oliver speaks of. That creature to whom comforts are often attributed. There’s nothing wrong with that sleeping creature — Mary Oliver exhorts us to let it “love what it loves” — but there is no potential for change there, either.

Anyway. All of this is to remind myself how important it is to branch out, to put out new leaves, to not let myself fossilize.

One thought on “The sleeper must awaken: meditations on climbing and new experiences”